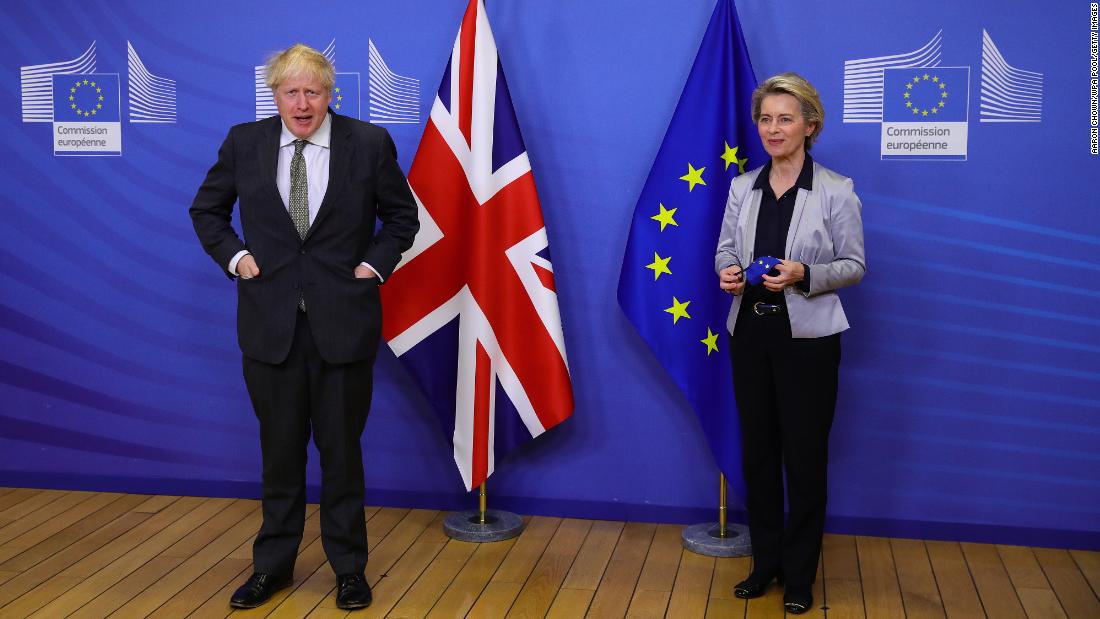 Still, the UK government has spent much of this week discussing the prospect of nullifying a key part of the Brexit deal Johnson himself negotiated and signed with the bloc in 2019.

The British government says the protocol is not working for several reasons, but mainly because Unionists in Northern Ireland are unwilling to form a power-sharing government with the Republican Sinn Fein party. Sinn Fein won Northern Ireland’s parliamentary election for the first time in history last week. However, the main Unionist party, the Democratic Unionist Party (DUP), says they will hold out until protocol is established to their satisfaction.

Yet officials in Brussels believe this is just the latest excuse London is using for ignoring the protocol, having previously claimed it hurts the UK’s internal market. To date, the UK government has not fully implemented the protocol, much to the disdain of the EU.

What exactly the UK government plans to do in the near future remains unclear. There are instruments in the protocol, specifically something called Article 16, which can unilaterally suspend parts of the treaty and trigger a consultation between the EU and the UK, if one party thinks it is not working properly.

Worse, in Brussels’ eyes at least, the UK has hinted that it could write policies in national law that would override the protocol.

Regardless of the arguments about who is right, there are serious questions to be asked about how sensible it is for the UK to engage in a fight with the EU at this point.

EU officials have made it clear to CNN that if the UK really does throw the baby out with the bathwater, it is prepared to retaliate in various ways. British media have talked about the prospect of a “trade war”, which the EU denies is the intention. However, as one European diplomat put it: “If the UK destroys the protocol in a way we see as damaging both our internal market and Northern Ireland, then all bets are off.”

Catherine Barnard, Professor of European Law at Trinity College, Cambridge, explained that if the UK “lawfully triggers Article 16 due to trade distortions, the EU could use rebalancing measures.” The bigger fear in Brussels, however, is that the UK is writing domestic legislation that will simply turn the protocol on its head.

“In that case, the EU could introduce enforcement procedures or even go so far as to stop parts of the trade deal that the UK and EU agreed in 2019. And that means tariffs,” she added.

Given the UK’s reliance on imports from and exports to the EU, this would obviously have a negative impact on the UK economy. And it’s this that baffles people in Brussels and London: why would Johnson want to do this when the UK is already in a cost of living crisis?

“Brexit was a conscious political decision to create barriers to trade between the UK and the EU. And to some extent we have already seen the cost of goods, including food, rise for UK citizens,” said Jonathan Portes, professor of economics at King’s. University of London. “Clearly, further trade barriers would exacerbate that, contradicting the Brexiteer’s claim that leaving the EU would lead to cheaper goods entering the UK through new trade deals.”

Hypothetically, signing new trade deals could do just that. However, trade deals are notoriously difficult to negotiate and require major changes in infrastructure to reap the benefits. And time isn’t something the British people currently struggle with putting food on the table.

So why is the UK government doing this? Members of Johnson’s Conservative Party have differing views on why it’s not a bad idea to take this fight now.

Many of them believe that the protocol was really an unfair deal that undermines the integrity of the UK. They believe that the risk of substandard British products entering the EU’s internal market – the main reason for the bloc to create a customs border – is sufficiently small in the context of everything else in existence. the world happens that the EU will eventually suck it up.

And as one high-ranking conservative figure told CNN, “It has the added benefit of making Johnson look like he’s standing up to the EU. If he’s thought to win this battle, it’s sure to appeal to his supporters.”

But this calculation also carries some risk. Another Conservative adviser said the prime minister is “playing with fire to reopen the issue of Brexit as he told the public in 2019 it was done and dusted.”

Diplomats and officials in Brussels are not so sure that if Johnson pulls the trigger in such a dramatic way, the EU would feel like it was playing nice. A senior official told CNN that “since we’ve recently had to take a hard line with some of our own member states, such as Hungary on the rule of law, I don’t see how soft the UK will be.”

Johnson’s approval ratings have fallen in recent months and how he handles the cost of living in the UK may be one of the few things that could win him back support. So in this context, doing anything that could exacerbate the crisis could backfire.

“Voters tend to punish the government when economic times are bad. If the government doesn’t get a grip on the cost of living quickly, they risk drawing the ire of the electorate the next time they go to go to the polls,” Will Jennings said. , professor of politics at Southampton University.

And Brexit is still a hot topic in the UK, one that voters often use as a stronger indicator of where their political allegiance lies than partisan politics.

“The Conservatives took advantage in 2019 because they could portray Labor as frustrating the will of the people,” Jennings added. “They are no longer in the same position. Voters want to enjoy the Brexit dividend – and technocratic bickering over international treaties is not so easy to sell to them.”

All this baffles officials and diplomats in Brussels.

“Does Boris really want supermarket shelves to be emptier than they are now? That was clear in the recent municipal elections [that] the reason people didn’t vote conservatively was the cost of living [concerns]’ said a senior European diplomat. “So why make it worse and make it worse if you’re the Conservative Party?”

Still, Johnson has made a career out of taking risks. Many have paid off, not least the biggest gamble of his political life to support Brexit, a move that would eventually land him at 10 Downing Street.

His instinct to kick Brussels may be digging him out of a hole and strengthening his support. Or it could be seen as simply the latest act of political desperation by a man trying to divert the government’s light on policy and try to get a handle on it the only way he knows how: by bashing his enemies.

Will Crypto Play a Role in Funding Abortion Access?