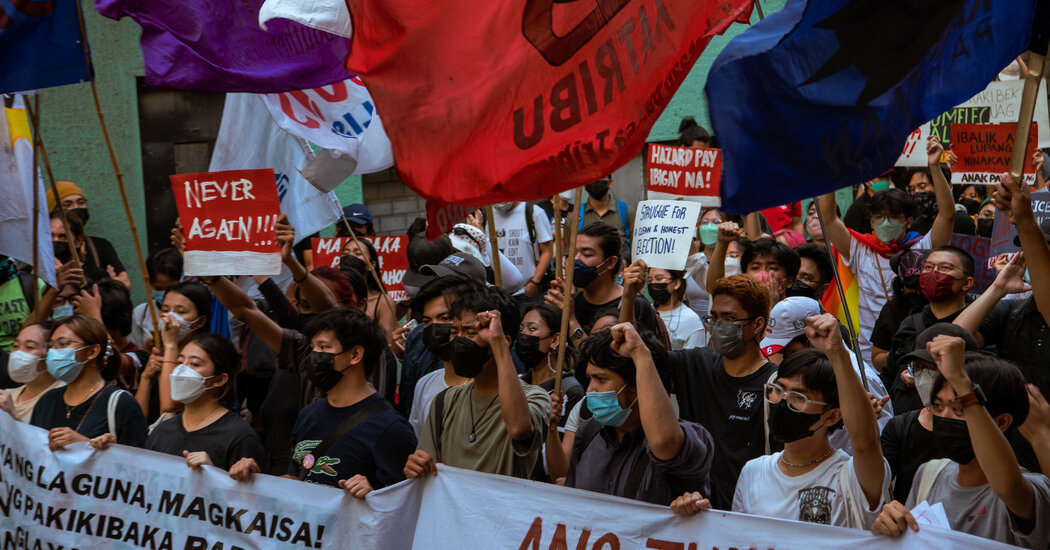 
MANILA — Angry young voters gathered in the Philippines on Tuesday to protest Ferdinand Marcos Jr.the son and namesake of the former dictator, who achieved a landslide victory this week in one of the most divisive presidential elections in the country’s recent history.

Multiple election monitors said they had received thousands of reports of election-related anomalies since Monday’s vote. Malfunctioning voting machines were one of the top concerns, with VoteReportPH, an election watchdog, saying the malfunctions had “seriously hampered this election process”.

On Tuesday, Leni Robredo, Marcos’ closest rival in the race and the country’s current vice president, said her team was investigating reports of voter fraud. But every poll before the election had predicted Mr Marcos would win by a huge margin, and his lead on Tuesday was so overwhelming that reports of fraud and machine malfunction were unlikely to influence the outcome.

Marcos, known by his childhood nickname “Bongbong,” had gathered nearly 31 million votes by 4:30 p.m., according to a preliminary count. That was more than double the number of votes Ms Robredo had, giving Mr Marcos the largest margin of victory in more than three decades. Turnout was around 80 percent, an election official said Tuesday.

During his campaign, Mr. Marcos appealed to an audience disillusioned with democracy in the Philippines, a country of 110 million and the oldest democracy in Southeast Asia. But for many Filipinos, the Marcos family name remains a synonym for excess and greed, and a painful reminder of the atrocities committed by the father.

Marcos’ 92-year-old mother, Imelda Marcos, was sentenced to 11 years in prison in 2018 for establishing private foundations to hide her unexplained wealth, but remains free. She paid bail, and her case is on appeal to the Supreme Court. Critics fear Marcos could use the presidency to drop that case and other pending cases against the family.

Paula Santos, a doctor in training, confronted the officers: “Personally, I’m scared,” she told them. “I’m 27 and I’m scared for our future, especially now that I’m an adult. When I was young I wasn’t involved in politics. But now I have goosebumps with fear.”

In the months leading up to the election, hundreds of thousands of young supporters of Ms. Robredo campaigned door-to-door to fight an online disinformation campaign that depicted the violent Marcos regime as a “golden age” in the country’s history.

Ms. Santos told officers she had supported the younger Mr. Marcos when he ran against Ms. Robredo for the vice presidency in 2016 “because of the beautifully crafted posts and infographics I saw on YouTube.” “But then I saw other accounts, I did my research,” she said. “Knowing the truth is now in your own hands.”

“We are not here to rewrite history,” she added. “We’re here to learn from it.”

In a later interview, Ms. Santos said she and her 17-year-old sister cried on election night. They had both campaigned for Mrs. Robredo. “I expected a close fight,” she said. “I didn’t expect it to be such a big gap between the numbers. It was hard to believe.”

Many voters across the country shared in her disbelief.

Impeachment and regret reigned among some Filipinos as they considered the possibility of another Marcos as president, 36 years after millions of their compatriots ousted the Marcos family for looting billions of dollars from the treasury.

Robert Reyes, a Roman Catholic priest who spent the past 11 weeks outside the election commission building every Wednesday to demand a clean vote, said the Catholic Church had failed to “denounce evil” . The Catholic Church, which has great influence in the Philippines, played a vital role in overthrowing the Marcos dictatorship during the 1986 People Power uprising.

“Hopefully this will wake up the church,” Father Reyes said. “For what moral authority has the son of a dictator who has not returned what his father stole? What authority does he have to rule a country whose people have been plundered by his father?”

Mrs. Robredo has stopped formally admitting the race. On Tuesday, she told her supporters that they must accept “whatever the final result will be”.

“I don’t see this as a loss because we have achieved a lot this election season,” she said at a Catholic mass in the Bicol region, where she comes from.

She has hinted at a bigger role for her broad movement, which she says “will not die at the end of the counting.”

The vote count could continue until the end of the week. On Tuesday afternoon, Mr. Marcos was due to deliver a victory speech. But in a statement, Victor Rodriguez, Mr Marcos’ spokesman, said his “unassailable lead” meant that “the Filipino people have spoken resolutely.”

“To those who voted for Bongbong, and those who didn’t, it is his promise to be a president for all Filipinos,” said Rodriguez. “To the world he says: Judge me not by my ancestors, but by my deeds.”

Sara Duterte, the daughter of President Rodrigo Duterte and the running mate of Mr. Marcos, had gathered 31.5 million votes Tuesday, more than triple the vote of Senator Francis Pangilinan, who acted as vice president in support of Ms. Robredo.

Mr. Duterte has been accused of rolling back democratic institutions during his six years as president. Opponents have warned that the alliance between the Marcoses and the Dutertes could usher in a new era of autocracy in the Philippines.

Mr Marcos and Ms Duterte are expected to take office on June 30.

As protests continued in front of the Election Commission building on Tuesday, protesters held up signs that read: “Never again” and “Fight Marcos, reject Duterte.”

Maria Socorro Naguit, 72, a freelance writer at the protest, said she was 22 when, during a crackdown on the press, the Marcos regime shut down the magazine she worked for. “I’m here because it’s too much, you know?” said Mrs. Socorro Naguit. “Frankly, I cannot accept the return of the Marcoses.”

When she saw the results come in Monday night, Ms. Socorro Naguit said her first reaction was to utter curse words. “And I thought of the republic. Oh my god,’ she said.

For Mirus Ponon, a first-time voter in Manila, Election Day was marked by excitement. The 20-year-old college student and civil rights activist queued for five hours to cast his vote for Ms. Robredo.

The euphoria did not last long. Several hours later he cried.

“You could see it from the standpoint of the structured propaganda and the machinery of the Marcoses,” he said. “But it’s something that makes you so depressed, as someone who loves the country. You want to keep fighting, but the country and its people are failing you.”