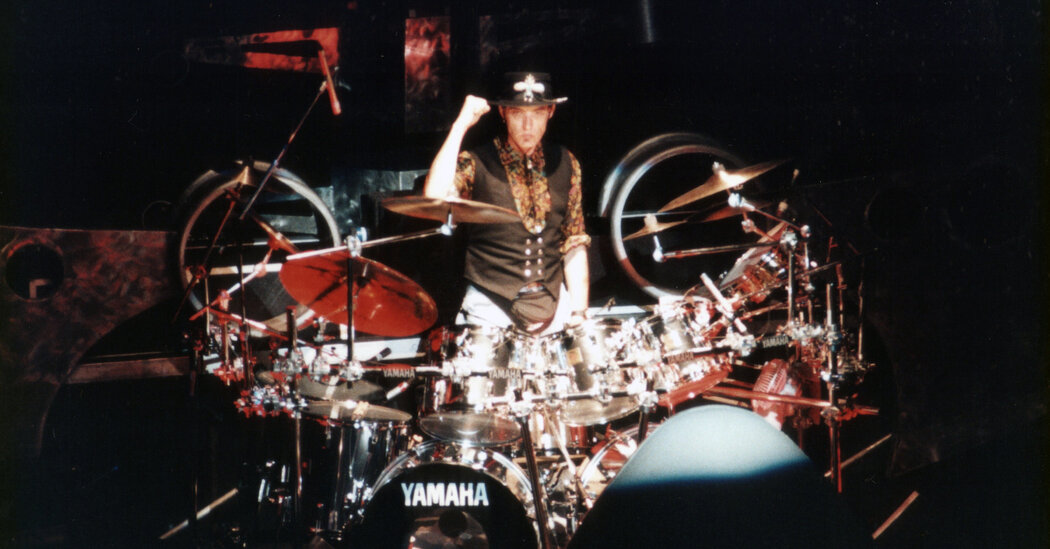 
Ric Parnell, a real drummer best known for performing in a fake band, the one featured in Rob Reiner’s legendary 1984 mockumentary, “This Is Spinal Tap,” died May 1 in Missoula, Mont. n lived for two decades. He was 70.

His partner, McKenzie Sweeney, confirmed the death. She said a blood clot in his lungs led to organ failure.

mr. Parnell was in several bands, including British prog-rock band Atomic Rooster, when he auditioned for “This Is Spinal Tap,” a chewed-up version of rock clichés, and landed the role of drummer, Mick Shrimpton. However, the central band members were not primarily musicians, although they had musical talent; they were comedic actors – Michael McKean, Christopher Guest and Harry Shearer. mr. Reiner played Marty DiBergi, a documentary filmmaker who records a disastrous tour of Spinal Tap, a past its prime and poorly managed heavy metal band.

“He looked perfect, all hair and cheekbones, but he also understood the joke and managed to play the reality without comment,” he said by email. “And he was a great drummer in the tradition of his hero, John Bonham” – the drummer for Led Zeppelin.

“On the podium,” Mr. McKean added, “he was the best kind of monster; behind the stage, a very nice, very funny guy.”

mr. Parnell only had a few lines in the film, but he was pivotal to one of the funniest jokes: drummers for the band had a habit of dying in bizarre and unpleasant ways. In one scene, he’s in a bathtub while Marty DiBergi asks him if he’s bothered by that history.

“It scared me a little, but it can’t” all the time happen,” Mick says, and Marty agrees, telling him, “The law of averages says you’ll survive.”

Unfortunately, the law of averages was wrong – towards the end of the film, Mick spontaneously ignites on stage. When the film developed such a cult following that the fake band started touring and playing real shows in the early 1990s, it required an adaptation of Mr. Parnell – he was now Rick Shrimpton, the late Mick’s twin brother.

Life almost imitated art in mid-1992, when Mr. Parnell fell down a flight of stairs rushing to a sound check while the band was rehearsing in Los Angeles. He injured an ankle.

“Despite the chance of meeting death by staying with Spinal Tap,” said a band publicist at the time, “he’s looking forward to continuing the tour.”

That “Return of Spinal Tap” tour eventually took the group to London’s Royal Albert Hall, a squeeze for British-born Mr. Parnell while waiting to join Mr. Shearer to continue.

“I remember standing backstage with Harry during ‘The Return of Spinal Tap’ and hearing the crowd in Albert Hall sing, ‘Tap!’ “Tap!” “Tap!” “Tap!”, Mr Parnell told The Missoula Independent in 2006. “I turned to Harry and said, ‘Come on, now. We are a joke! Don’t they know?’ It was just amazing how pretty big it all got.”

About two decades ago, Parnell settled into a much quieter kind of life in Missoula, where for a time he ran a radio show called “Spontaneous Combustion” on KDTR-FM, where he told stories and indulged his eclectic taste in music. For one show, he played only artists who were alumni of Antelope Valley High School in California, including Frank Zappa and Captain Beefheart.

“I can play what I want, do what I want – all as long as I don’t swear,” he told The Independent. “That’s the only hard part.”

Richard John Parnell was born on August 13, 1951 in London to Jack and Monique (Bonneau) Parnell. His father was a composer, conductor and drummer, and he said drumming was taken for granted from an early age.

“I got it from my father,” he told The Missoulian in 2007. “I could sit down at the drum kit and play a beat right away.”

Lessons, he said, weren’t his thing; he learned by playing in groups.

“Over the years I have built up a technique,” he told the newspaper. “I get drummers who say, ‘How did you do that?’ I say, “I have no idea. I’m just hitting.” I wouldn’t tell a flam-doodlehead a paradiddle.”

His father, who worked as a music director or in other capacities on numerous TV shows, sometimes contributed to his education by bringing him to the set. He remembered sitting at Jimi Hendrix’s feet when… he performed in the British TV series by singer Dusty Springfield in 1968.

Mr. Parnell’s own career began at about the same time. He remembered touring with Engelbert Humperdinck as a teenager. He joined Atomic Rooster in 1970, then joined an Italian group, Ibis. In 1977 he moved to the United States with a band called Nova, which settled in Boulder, Colo.

He has played numerous studio sessions over the years and can be heard on records by Beck, Toni Basil and others. For a while he toured with the R&B saxophonist Joe Houston† They stopped in Missoula for a few shows every year before heading to Canada to tour there. But, as Mr. Parnell often told the story, for a year the group had no papers to cross the border and had to extend its stay in Missoula.

“I actually got stuck here and then didn’t want to leave,” he told The Independent. “I’ve always liked this place – it’s like Boulder in the 1970s, when I first came to the United States. I became a Missoulian instantly.”

mr. Parnell was married and divorced four times. In addition to Mrs. Sweeney, he leaves behind two brothers, Will and Marc, and two stepsisters, Emma Parnell and Sarah Currie.

Over the past two decades, he could often be found playing with one group or the other at local places in Missoula. In 2004, a writer for The Missoulian asked if, as an accomplished musician, he was ever tired of being recognized only for his prank band.

“No, not really,” he said. “It’s really nice to be a part of such a legendary thing.”