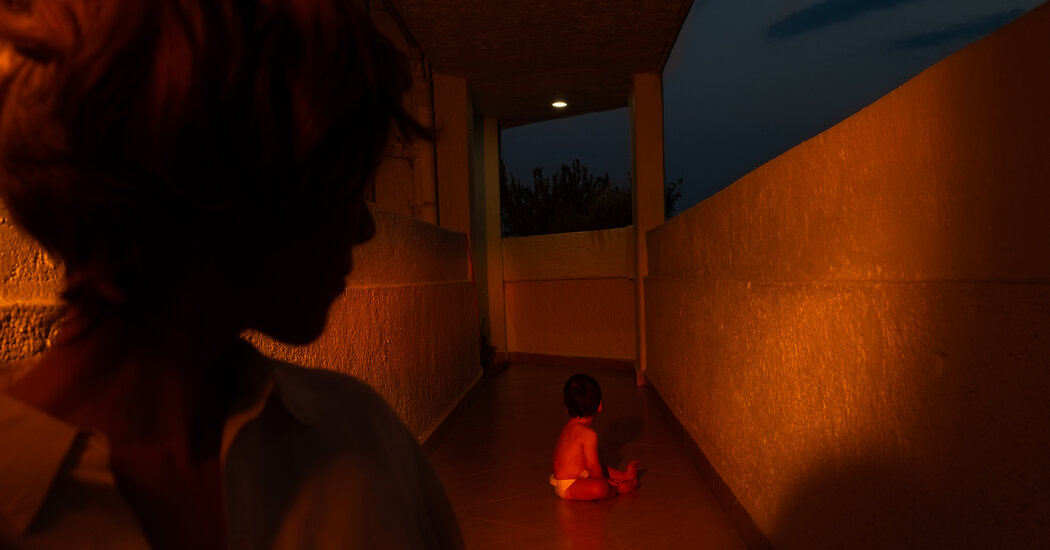 
“The Baby” is smart about turning this mode into comedy, though the mood soon darkens. At first, Natasha’s antipathy toward parenthood feels refreshingly specific, with its focus on the mundane degradations that can haunt the imaginations of the happily childless. A dirty diaper escalates into a scene of physical horror; a battle to fold a stroller ends with a severed finger. But the homicidal baby metaphor increasingly focuses on the potential pitfalls of motherhood with each episode. Soon the show will also be about postpartum depression and forced birth and forced heterosexuality and intergenerational trauma.

There’s something frustrating about this relentless construction of motherhood as a horror show, and not just because mothers experience the full range of human emotions (some of which are explored more faithfully in a Hallmark movie). Breaking a taboo, the genre has created a new cliché: of the exhausted mother being pushed to her psychological breaking point. While the lack of support for mothers is a structural problem, it is reformulated as a personal problem, with a narrative solution akin to a postpartum therapy session or an invitation to collective screaming† Mothers are made to suffer, and then they are flattened into a long-suffering mother person.

There’s a cute, horror-inspired term on the internet for this kind of mom: the mom† This slightly ironic version of the overwhelmed mom persona is ascendant on Instagram, TikTok and ecommerce novelty sites, where the lobotomized stereotype of the mommy influencer is countered with a version of motherhood defined by disheveled humiliation. In this exaggerated burlesque performance, motherhood becomes analogous to: jailor the feeling that the wheel of a child scooter repeatedly hits you in the ankle bone for eternity†

These jokes are often accompanied by heartfelt messages about the value of negative feelings about motherhood and the importance of speaking out. But the persona can also seem curiously invested in feeling aggrieved, as if the transformation of suffering into content is itself a balm. A common joke format is complaining that men don’t help, but if they do help, they’re not helping properly. If you don’t understand it, maybe it’s because you’re so smugly privileged that you can pay other women to do the grind of motherhood for you. (A recent episode “Atlanta” actually takes a great comedy-horror out of this premise: When the Trinidadian nanny for a rich white boy suddenly dies, the parents are haunted by the realization that she was more family to their son than they were.)

I found relief from this narrative trap in “Everything everywhere at once,” which breaks her overworked mother character from the confines of the domestic horror genre by jumping her into a multiverse of exciting supernatural possibilities. The film opens with Evelyn (Michelle Yeoh), a laundromat owner who is harassed by her elderly father, her bumbling husband, her depressed teenage daughter and the IRS. — until she discovers that there is an abundance of Evelyns in endless multiversa, that she just happens to be living the most disappointing version of her life, and now she must tap into her untapped potential to save the worlds. “Everything Everywhere” takes up familiar themes of fraught mother-daughter relationships and overworked mothers, but this time the film’s entire paranormal dimension is built around Evelyn’s powerful complexity.

After a numbing few weeks of watching moms being tortured on screen, the absurdly funny “Everything Everywhere” is the one that really made me cry. But even during this lofty viewing experience, I was reminded that I was still alive in our universe. Before the previews started, the theater showed a KFC commercial where a family gathers around the table for a fried chicken dinner. We hear each of their internal monologues as they dig, “Mmm, mac and cheese,” the son thinks. “Mmm, offers”, the father thinks. Then we hear the ghost of the mother, fed only by a break from her household burden: ‘Mmmm’, she thinks. “Silence.”